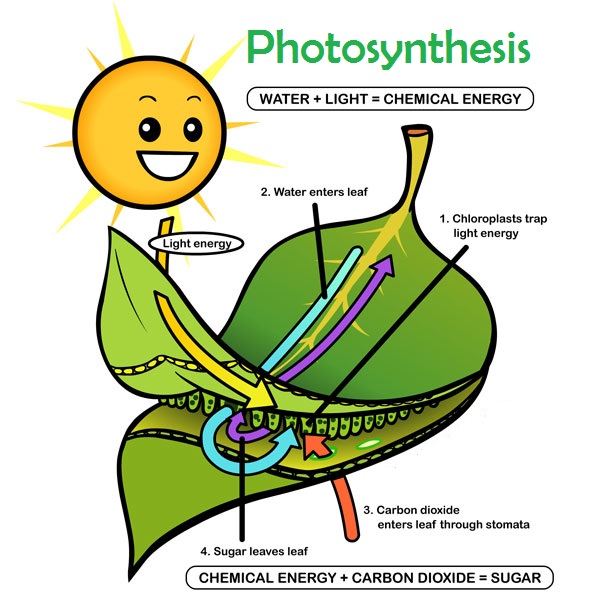 Introduction to Photosynthesis   Part I 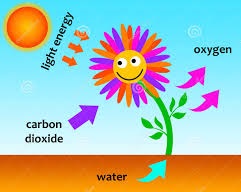 Living things that depend on others for food
are called heterotrophs. Herbivores like cows and
other plant eating insects are examples of heterotrophs.

Living things that produce their own food are
called autotrophs. Green plants and algae are
good examples of autotrophs.

Apart from the food they manufacture, plants also need carbon,hydrogen and oxygen to survive. Water absorbed from the soil provides the hydrogen and oxygen. During photosynthesis, carbon and water are used to synthesize food. They also need nitrate to make amino acids (Amino acid an ingredient for making protein). In addition to that, they need magnesium to make chlorophyll.

Photosynthesis is a chemical process through which plants, some bacteria and algae, produce glucose and oxygen from carbon dioxide and water, using only light as a source of energy. This process is extremely important for life on earth as it provides the oxygen that all other life depend on. 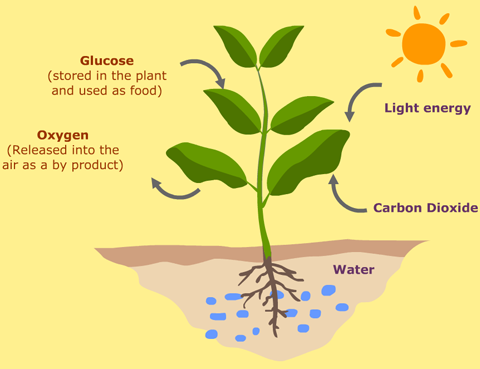 What does the plant need glucose (food) for?
Just like humans and other living things, plants also need this food for many things. Le’s see a few:

Glucose resulting from photosynthesis is used during respiration to release energy that the plant needs for other life processes.

The plant cells also convert some of the glucose into starch for storage. This can then be used when the plant needs them. This is why dead plants are a used as biomass, because they have stored chemical energy in them)

Glucose is also needed to make other chemicals such as proteins, fats and plant sugars that are all need for the plant to carry out essential growth and other life processes.

Light and dark reactions in photosynthesis

Photosynthesis is divided in two parts: 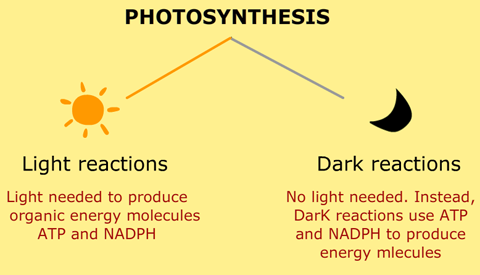 Dark reactions make use of these organic energy molecules (ATP and NADPH). This reaction cycle is also called Calvin Benison Cycle, and it occurs in the stroma. ATP provides the energy, while NADPH provides the electrons required to fix the CO2(carbon dioxide) into carbohydrates.

REMEMBER
This means Dark reactions will fail to continue if the plants are deprived of light for too long, since they use the output of the initial light-dependent reactions.

The basic structure of a leaf

We cannot fully study photosynthesis without knowing more about the structure of a leaf. The leaf is adapted to play a vital role in the process of photosynthesis.

Wide surface area
Most green plants have leaves that are broad, flat and exposed to capture as much of the suns energy (sunlight) need for photosynthesis.

Veins
The network of veins in the leaf also carry water from the stems to the leaves. Glucose produced is also sent to the other parts of the plant from the leaves through the veins. Additionally, the veins support and holds the leaf flat to capture sunlight

Pores (holes)
The stomata (tiny holes underneath the leaf) allows air in and out of the leaf. Stomata (single is called stoma) is usually at the bottom surface of the leaf but some plant species have them on the upper surface whiles other have them on both sides.
The stomata closes in the night to retain gases and moisture in the leaf cells, and opens during the day for gaseous exchange to continue.

Below is a close diagram of the leaf structure: 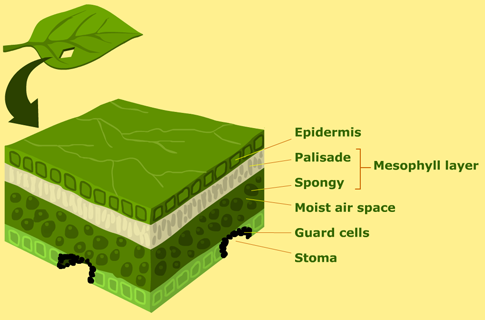 Below are things that plants need for photosynthesis:

Carbon dioxide (A colorless, naturally occuring odorless gas found in the air we breathe. It has a scientific symbol CO2. CO2 is produced by burning carbon and organic compounds. It is also produced when plants and animals breathe out during respiration)

Light (Even though both natural and artificial light is OK for plants, natural sunlight is usually great for photosynthesis because they have other natural UV properties that help the plant)

Below are things that plants make by photosynthesis: 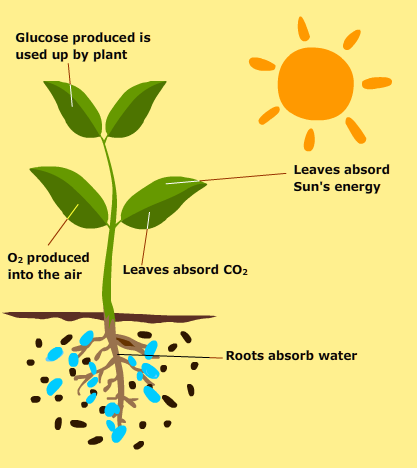 The oxygen produced is released into the air from the leaves. The glucose produced can be turned into other substances, such as starch, which is used as a store of energy. This energy can be released by respiration.

If factors that aid in photosynthesis are absent or less, it can negatively affect the fruits of the plant. For example, less light, insects that chew on leaves, less water can make plants such as (tomato plant) suffer and produce less yield.

Stay tuned in for Part II

Click below for a free trial class and get help by our expert tutors in Biology Tutor, Physics, Math, Chemistry, Accounting, Literature 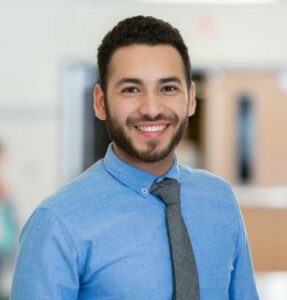